It’s no secret that I’m proud to be Cajun. My name is so unique that everyone asks if I’m French when they hear my first + last names. I proudly respond with “Nope. I’m Cajun”.

The decision to keep my maiden name after I was married was because I felt that it was a constant reminder of my Cajun roots. That tie to my culture wasn’t something I was willing to part with. Recently, I’ve started to ponder exactly what being Cajun means to me – what traits are typical of the Cajun culture. What makes us unique?

Each week I’ll take one of these traits and explore it a bit with some real world examples to share with you. If you’re Cajun, I hope that you’ll identify with my thoughts & feelings and follow along each week as we explore our culture’s traits. 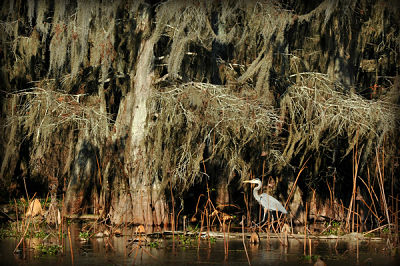 A blue heron in Lake Martin

The first trait that comes to mind when I think of the Cajun culture is “Resourcefulness”.

That quote really spoke to me. Our ancestors were exiled from Nova Scotia. They were dealt a crappy hand and yet they still made the best out of it. Those resourceful individuals took an area of the country where no one else was willing to settle and made it work for them. They learned to live off the land, to cook the available wildlife and make it not only edible, but delicious. They didn’t just survive, they thrived. I haven’t heard many people exclaim with disgust when you mention Cajun food. Have you? I didn’t think so.

Here’s another recent example of resourcefulness – a 72 year old man from Cut Off, Louisiana invented a machine to combat the waves that are eroding the coast of Louisiana. The machine would not only fight erosion by preventing it, but it also captures sediment to aid in rebuilding the land. Many of us are aware of the sobering reality of the immense coastal erosion issue in South Louisiana. It should come as no surprise that his solution uses a motor from an old washing machine. He has no formal engineering training, he just learned by doing. He jumped in and started tinkering with what he had available to him at the time. Here are a few of my favorite excerpts from the article:

“Pierce, however, would argue that swamp ingenuity is nothing new. His uncles made their fortune in the 1950s by inventing the Cheramie Marsh Buggies, tractors with 12-foot steel tires that allowed oil men to survey previously inaccessible marshland. He hung around their shop as a boy, where he developed a knack for tinkering.”

“It’s in my nature to invent things,” says Pierce, a white eyebrow raised playfully as he explains that he’s never had any formal training as an engineer. “It runs through my blood.”

“His brainchild, the Wave Robber, is a floating shield against the relentless waves threatening to swallow the region whole. The device recently won top prize at one of New Orleans’ premiere startup competitions. It may just be the bayou’s last, best hope at a future, but it wasn’t built in a fancy university lab or by a team of engineers. Pierce built it using an old washing machine motor in his backyard.”

How have you seen this trait of resourcefulness expressed in the Cajun culture? Share any stories below, I’d love to hear them!