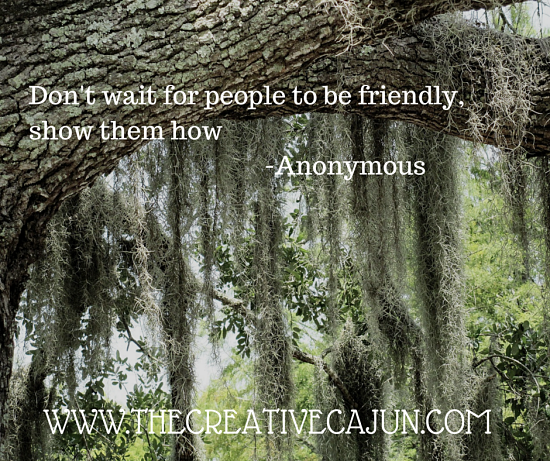 As I outlined in a previous post, I’m writing a series of blog posts about what being Cajun means to me – the traits typically found people who identify with the Cajun culture. In previous posts, I blogged about resourcefulness and our joie de vivre, the importance we place on family and our resilience. This week, I’d like to discuss our friendly nature.

For those of us who grew up in Acadiana, we understand how friendly and outgoing other Cajuns are – it’s not uncommon to make a friend while you’re standing in line at the grocery store. Hell, if you’re in line for hours at the DMV, you might just leave with a new best friend. You’ll likely have each other’s family history and discussed whether you know each other’s relatives.  I’d imagine the conversation might go something like this:

“Mais chere – do you know that Hebert family from Abbeville? Well, that’s my first cousin, yeah.”

“Oh yeah? Well, we went to high school together and my best friend married his brother”

Yes, we are that friendly – pretty much all the time.

The friendliness is even greater for those of us who are living outside of Cajun country and find ourselves in the company of another Cajun. Watch out! We’re sure to become instant friends when we meet a fellow Cajun in our new city. There’s something about the commonality of a culture and geographical area that will form an instant bond between two people.

Every time we travel, my husband is mortified when I strike up a conversation with people in public. He’ll usually say “Why are you talking to them? They might just want to be left alone.” or “Aren’t you afraid that you’re telling someone too much about yourself?”

Nope – that’s how I was raised. We talk to pretty much everyone and we’re pretty open with one another.

Sometimes a new friend will be the person sitting next to me on a flight – other times it might be talking to someone in a restaurant. I basically make friends wherever I go. I credit my Cajun roots for this skill, something I consider an asset.

Do you know how many interesting people I’ve met this way? I could share interesting stories from my travels all around this country of people I’ve met just because I wasn’t afraid of saying hello and finding some common bond between myself and someone else.

Just last week, it was some random person in my office building – we were talking about how light traffic had been the week after July 4th and before we parted to go our separate ways in the elevator, I’d recommended a traffic routing app on his phone to help him find the best route to work based on traffic conditions. That’s just the Cajun way. I never got his name, but it surely brightened my day to begin with a friendly conversation – even if it was a stranger. He appreciated the advice and the app recommendation for his phone.

What would it take to be just a bit more friendly? Strike up a conversation, make someone laugh – smile and greet a service worker who may be having a rough day.You’ll both feel better and you’ll help spread some Cajun culture wherever you may go, even if you’re living outside of Acadiana.