In the early 1980’s, my Uncle Bob had a great idea for a business – we’ll rent videos to individuals to watch at their home on this awesome new technology – a VCR. Folks, this was back in the days of the BetaMax vs. VHS format wars – I mean old school video store stuff. My parents teamed up with my aunt and uncle and they formed a video rental business. They named it “Video Store Galore”. It wasn’t long before the business took off.

In it’s heyday, we had multiple store locations all around Lafayette and even one or two in Washington and Opelousas. We had tons of promotional materials – from t-shirts to match books and even these cool notepads that were like the precursor to the Post-It Note. It was a notepad with a clear sticky strip along the top – like transparent scotch tape.

This past Christmas, we were all gathered at my cousin’s house and I commented that I wished I had a t-shirt from Video Store Galore and he pipes up “I’ve got one – want me to go get it?” I nearly jumped out of my chair. Just a few moments later, he comes in with this vintage shirt – he’s been saving ALL THESE YEARS. I was stunned. This was the Video Store Galore logo in all it’s colorful glory. 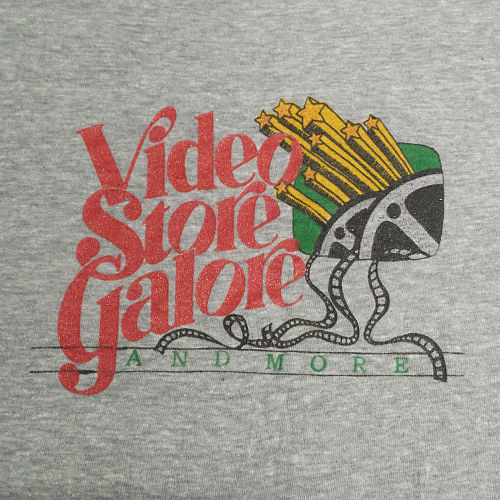 The biggest bonus to having a video store as a family business –  all movie rentals were FREE! Our parents also attended a conference in Las Vegas every year where they’d get the opportunity to record a short video with some sort of celebrity telling us kids what cool parents we had and that they got to meet this really cool famous person. The video was probably less than a minute long, but we still thought it was cool. I think one year the selected celebrity was Hulk Hogan – my cousins were especially impressed with that one. I would’ve preferred Punky Brewster or ALF. (I was a big ALF fan, I can’t explain why .WHAT was I thinking?…but I digress…)

The staff at the Video Store became like a second family to us. My mom kept the books for the stores and I LOVED stamping the backs of the checks for her with the “FOR DEPOSIT ONLY” stamp. I’d look at all of the pretty check designs and dream of having my own pretty checks one day. When I was sick, she’d haul me to the office and I’d sleep under her desk while she worked. Owning a business and working for yourself was just a part of life. 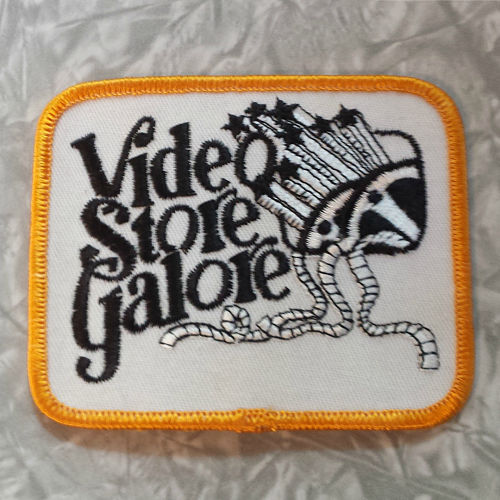 Apparently there were patches of the logo as well. My Aunt Jan sent me this as a keepsake.

All good things must come to an end

After Blockbuster arrived on the scene, it put a great amount of pressure on our local, family owned business and we were reduced down to 1 store. After my parent’s divorce, my mom took ownership of the one remaining VSG store and she ran it for years until selling it to the store’s dedicated, long time manager, Roland.

A built in job…

When we reached our teenage years, we were all expected to work at the video store. The bonus was that you could watch all the movies you wanted during your shift (well, you couldn’t really watch R rated movies and if you did, you should do that on a slow night and pause it if someone comes into the store). At 15, I was closing the store and at 16, I would open on Saturday mornings and work the 9-2 shift alone. That was a huge responsibility for someone my age, but an incredible learning opportunity for me. I learned business processes, customer service, retail/cashier skills – all of these skills prepared me for future jobs and taught me responsibility, which is an experience I believe every teenager should have.

Lessons for the future

I also believe that seeing my family run a business also planted the seed for me to pursue owning my own business. I saw what was involved and the sacrifices you make being your own boss, but I also saw the freedom and flexibility that comes with entrepreneurship.

I still miss the video store. I really was spoiled and resented having to pay for movie rentals once I was in college. I would seek out the locally owned stores and shun Blockbuster as much as possible. I find it hilarious that my job as a video store clerk has basically been replaced by a vending machine today (Redbox, anyone?). Wow, that’s’ pretty amazing.

What was your first job? Did your family have a business? If so, what was it? Share your story below!