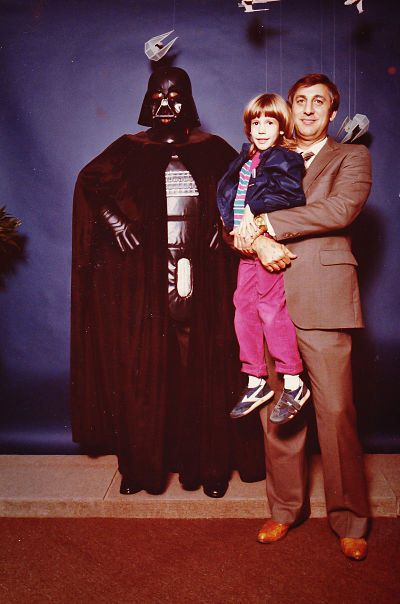 I met Darth Vader. In real life. When I was a kid.

As I explained in an earlier post, my family owned a video store. This means that the stores received posters and other promotional materials when new movies were released. Movie posters were a dime a dozen and as store employees, we’d call dibs on any really awesome ones when we received them prior to the release of a new movie. It was like free wall decorations for our rooms all the time.

I remember one particular time we received a bumper sticker when “Top Gun” was released and it said “I feel the need…the need for speed” and I stuck it on my 3-ring binder for school. Some punk kid came up and told me that “speed” really was a drug and that I was advertising that I was jonesing for a hit of speed. Really, dude? I was in elementary school at the time, I was just trying to be cool – and likely failing miserably. I had no interest in recreational drug use. What a turd.

Promotional events were also hosted at the stores for new releases of particularly popular movies – like Star Wars. When the Star Wars movies were released, my uncle somehow got his hands on a Darth Vader costume and there was some promotional event at our flagship store on Johnston Street in the Time Plaza store. Customers could come in and get their photo taken with Darth Vader.

I recently found this hilarious photo of my father holding me next to Darth Vader. I assume this was one evening after he’d been at his office working  as you can see he’s dressed in his business suit + cowboy boots.

The business suit + cowboy boots combo was his uniform for work every single day. Who wears cowboy boots with a business suit? I didn’t even realize that was a bit odd until I was older. To me, it was normal. He was never one to be a follower, I tell you.

What’s the most famous person you’ve ever met in real life? Share your story below.