As mentioned in previous posts, I recently attended a soaper’s conference in Kansas City. The bonus for me was that my sister lives in Kansas City and generously offered me a place to crash + the use of her car during the weekend to get to and from the conference. I gladly took her up on her offer, registered for the conference and booked my flight. Little did I know what fun we had in store during that week.

She picked me up at the airport and immediately handed me her phone and said “I found a thrift store. Navigate me there” and within 15 minutes we were perusing treasures in a thrift shop right off I-29. We found a few treasures – too bad I couldn’t fit this recliner in the overhead bin or I’d have purchased it! 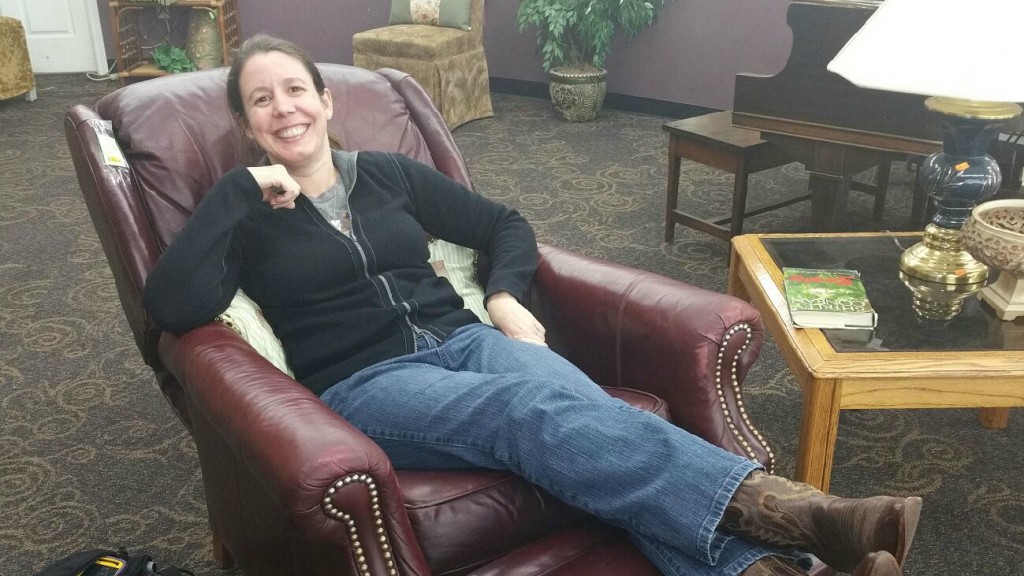 Testing out the leather recliner at the thrift store.

The monster in the basement

The next morning, we were rushing to get the kids off to art camp (they were on spring break that week). I was staying in the basement “suite” and there’s a hole in the door to the basement from a time when they had a pet cat. It’s now just a gaping hole in the door. As I was coming up the stairs, I saw that my sister was in the kitchen – just on the other side of the basement door, prepping lunches for her kids. I thought “Wouldn’t it be funny to stick my hand through there and scare the crap out of her?” and then a BETTER idea popped in my head “I bet my head would fit through that hole.” Oh dear. You know what comes next. Yes, I had to tilt my big ol’ melon to get it to fit through the hole, but the minute she closed the fridge door and I said “Hey!”, she just about jumped out of her skin. We both had great belly laughs – it felt so good have a good, hearty belly laugh. There may or may not have been tears shed. Yes, it was THAT funny. 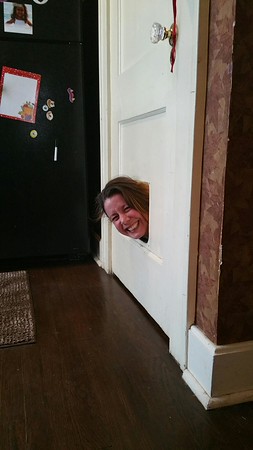 The monster in the basement!

Oh dear, you know me too well…

We spent days shuttling her boys around to art camp and shopping at fun + funky local shops. We splurged on lunch at a Mexican restaurant near her home. We were both too stuffed to finish our lunch and I promptly requested a to-go container. She couldn’t finish her portion either and started eyeing my container. I tried furiously to flag down a server and she commented “Let me guess? You don’t want my food touching your food?” and I was totally busted. Why does my sister have to know me so well? We crafted a plan to use the same container, but appropriately separate the food (it involved the use of tortilla chips & the paper from our chip basket) and all is well that ends well. The experience did reinforce the fact that she knows me all to well. It also helps that she has a child who is notoriously picky about his food, so I was totally ratted out. I joked with her later that week that she had a “Little Desi” as her 2nd child. It’s true – he and I have a lot in common.

Other oddities on my visit included running to CVS on Friday night and crashing a wine tasting. There were pallets of wine in the aisles of the store. Who has wine tastings at a pharmacy on a Friday night? Apparently it’s a thing there. My sister called when I was in the store and I remarked how it was crowded and people were walking around with wine glasses and how I almost tripped over a PALLET of WINE in the aisle. She confirmed that this was indeed a regular occurrence and remarked that it’s actually a great place to buy wine. I guess to-go cups are strange to non-Louisiana natives, so I can’t judge their pharmacy wine tastings. 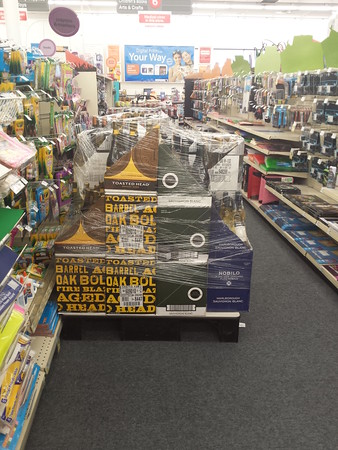 The giant pallet of wine in the aisle at CVS.

Saturday night, she took us to some strange concert at a church in town. It was music from Bali and I can only describe it as a bunch of folks playing a xylophone with what appeared to be hammers purchased at a local hardware store. It was like no other musical concert I’d ever attended. As you may guess, the 3 young boys we had in tow weren’t enthralled and opted to leave at intermission. We had a friend of her oldest son with us who was quite a ham. The most entertaining & unusual part of the evening was listening to the two of them (mind you, they are in the 1st grade!) converse in French in the back seat of her car. I could understand some of what they were discussing, but I truly felt like I was in another country, but yet we were driving down the street in Kansas City. These kids were impressive! They were totally fluent and could switch between English & French in an instant. My sister (who has a Minor in French) joined in their conversation and responded to one question in English. I said “Hmm, why did you switch to English?” and she remarked “Because I didn’t know how to say what I needed to in French.” As you may guess, that gave me a good laugh. Really, my sister doesn’t know something in French? NONSENSE!

Later that evening, I remarked to my brother in law how I was impressed with the kid’s French language skills and he replied “Yeah, your sister used to correct my pronunciation when I first met her. Now J (her eldest) corrects HER pronunciation” I just died laughing. Good one. I need to remember that as  fun story for them as they grow up.

My visit ended with a great meeting with a team of graphic designers on Monday morning and then a brisk walk back to my sister’s house after the meeting. I had a 20 minute walk to get done in 15 minutes before my ride to the airport was to arrive. I collapsed into the shuttle van just a few minutes late to a very understanding and patient driver. He even offered to stop so I could get a bottle of water. As the ever prepared Girl Scout, I had a bottle of water tucked into my purse. We chatted about life on the way to the airport. He was a very generous fellow and as I flew back to Atlanta, I was reminded how down to earth and friendly mid-westerners can be. It’s different than Cajun country, but I was thankful for kind, down-to-earth folks who go beyond just doing their jobs.

What fun times have you had with your family recently? Share your favorite fun family stories below in the comments!