We’ve waited YEARS for a Cabela’s store to open in Georgia. My husband and I have always been big fans of Cabela’s and we’ve visited their flagship store in Sidney, NE on road trips out west to see his family. Their products are top notch and their stores are like a giant toy store for people who love outdoor activities. We were thrilled when we heard that a store was opening near our home – in the suburb of Acworth, GA. Knowing that it would be a complete madhouse until the excitement of the new store waned, I wanted to wait a while before visiting.That was a solid plan, but the plan went out the window when I heard that Jacob and Troy Landry would be there from 11AM – 3PM the Sunday after the store opened for a meet and greet. Well that settled it – we were going to Cabela’s and I was going to meet the Landry’s.

The autographed promotional flyer from the Acworth Grand Opening

Fast forward to the morning of the event, we approach Cabela’s and traffic is absolute insanity. They aren’t allowing any additional cars into the store’s parking lot and people are just inventing parking spots at any property along the highway near the store. There was a satellite lot and shuttle buses to assist with overflow parking, but that was on the other side of the interstate and I had no idea it was even there at the time (I found out afterward about that option).

I was so frustrated at trying to find a parking spot where I didn’t think we’d get towed and fighting traffic that I *almost* just gave up and turned around. We found a suitable parking spot where I didn’t think there was much of a chance we’d get towed and we set off for the ½ mile walk to the store. (Yes, I told you this was insanity). We get to the store a few minutes after 11 and ask where Jacob and Troy will be greeting guests and we’re told that we need to get in line and it ends at the red balloon. Well, the red balloon was in the furthest corner of the store and the line snaked halfway around the store. It was disheartening seeing people just cut through the line and hand employees hats and trinkets for them to sign. I refused to just leave with some autographed trinket. I wanted to MEET them.

We waited in line for over 2 hours and finally got to the front of the line. By this time I made friends with the folks in line in front of us and I took video of them meeting Troy & Jacob. There was a store employee using camera phones to take photos. I handed her my phone. They were furiously signing promotional sheets and they stopped to greet us. I introduced myself and told Troy that I was a Doucet from Lafayette and he said “Well, what in the hell are you doing here, then?” and I just laughed I should’ve told him I was lost and I hitch a ride home? 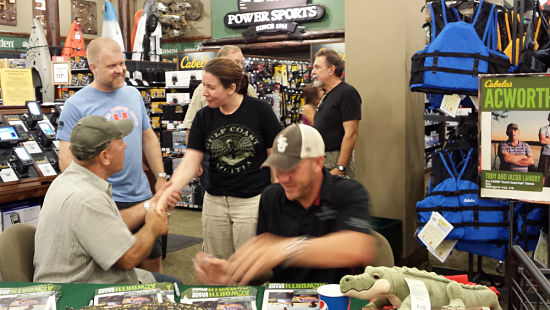 This was likely when Troy asked me “Well, what in the hell are you doing HERE?” when I told him I was from Lafayette

Troy was so genuine, friendly and real. That’s how people back home are and I love it. They have a sense of humor, they’ll be candid with you and tell you like it is, but they’re always warm and welcoming. We didn’t have much time to chat with them and there were plenty of folks in line behind us, so we took our 30 seconds with them and then left the store. Was it worth the 2 hours? Probably so. 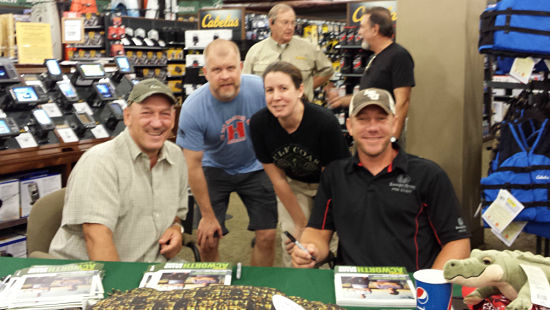 Troy Landry, my husband (Joel), me (Desi) and Jacob Landry

Yes, I could’ve just headed to Pierre Part next time I was home and I probably would’ve run into him at the gas station, but I want to respect their privacy. I’m sure they wouldn’t appreciate being hassled in their hometown. The Landry’s are my favorite family on Swamp People. Troy’s accent is like music to my ears. I miss hearing the Cajun accent and vocabulary. I love how he’s passing his knowledge and skills on to the next generation.

Like I’ve said before  – you don’t appreciate it until you move away. I would love to work to preserve the Cajun culture. It’s so important to me that we work together to make sure the unique language and traditions are preserved and passed on to the next generation.

I’m open to your ideas – how can we best preserve our wonderful culture? Please share them below and we’ll get the ball rolling. I can’t do this alone, I need your help. Jump on board and let’s act before it’s too late.