I don’t think I’ve ever heard anyone say that Cajun cuisine isn’t delicious. I recall moving to Atlanta and being disappointed in being served such bland food, even after people would rave about the wonderful restaurants in and around Atlanta. Dining out in Louisiana features delicious food and some customs that may not be familiar to you. Here’s a primer on what you might find in a typical Cajun restaurant in South Louisiana: 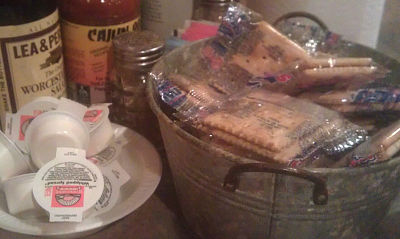 The typical butter (usually margarine) & crackers at a Cajun restaurant

What’s with the butter & crackers?

Another nuance you might notice when patronizing restaurants in and around South Louisiana is the butter and crackers on the tables. I never viewed this as odd until moving out of town. No one else seems to have picked up on that tradition. Think of it like bread & butter, but a more informal version. A tip if you’re eating boiled crawfish and there happen to be saltines on the table – crumbling them in your hands after you’re doing eating the crawfish will help you get your hands clean. Then head to a sink with plenty of soap to finish washing off the boiled crawfish residue.

When in doubt, assume it’s fried:

If when reviewing a menu in a Cajun restaurant, you may just see “Catfish”, “Shrimp”, “Crawfish” listed, but no details on the preparation method. When in doubt, assume it’s fried. Most places will broil whatever you choose if needed, but fried food is the bread and butter of restaurants in the south and Cajun country is no exception.

What do you mean by “Crawfish Season”?

Yes, you’ll only be able to snag delicious boiled crawfish while it’s “in season”….so what does that mean? Even though crawfish are available earlier than March, you’ll typically find the biggest, most bountiful crop from March until late May. If you would like boiled crawfish, be sure to visit during those months. Prices vary on the season and how plentiful they are – you’ll also pay more around Good Friday as it’s customary for Cajun families to boil crawfish on Good Friday.

For best tasting seafood, stick to what’s in season

While you’re there, splurge for the seafood that’s in season – it’s delicious and fresh. Did you know that most of the country’s seafood is caught in the Gulf and exported from Louisiana? I was amazed when I first learned of that little-known fact. Here’s a handy site that lists what’s in season and when, so you can plan what will be fresh during your time in Louisiana.

If you’re eating at an out of the way establishment, don’t expect craft beer and fine wine. You’ll likely have a choice of Bud, Bud Light or Coor’s and that’s it. Some newer, more upscale restaurants are beginning to pop up, but the old, out of the way country restaurants will keep it simple – and sometimes those are the most authentic and delicious places to eat. 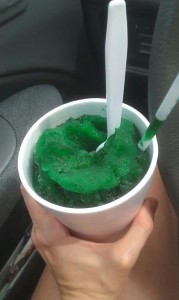 There are snowballs? In Louisiana? In the summer?

Get a snowball when you’re visiting. Trust me, it’s worth it. A friend here described it as “The best thing I’ve ever put in my mouth” – especially in summer when it’s hot and humid. A snowball is best described as delectable shaved ice with a syrupy topping. You’ll even find options for a scoop of ice cream in the center or condensed milk poured over the top. Check out online review sites like Yelp or TripAdvisor to find the best snowball stand in the city you’re visiting and be prepared to wait in line. Yes, they’re that popular. (In Lafayette, I recommend Cajun Sno on Rena Drive & Johnston)