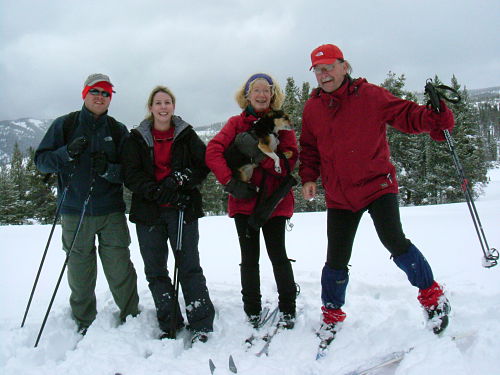 It’s no secret that I was born and raised in Louisiana and it’s likely that you’ve figured out that Louisiana doesn’t get much snow. We did have a light dusting when I was in second grade but it was only at our house in Washington, which is about 45 minutes north of Lafayette. The “snow” was such an event that I remember my mom picking us up early from school because it was SNOWING and she didn’t want us to miss being able to play in it. The reality was it was a very light dusting and all we could do was make a leaf ridden somewhat sizeable snowball in the front yard – it wasn’t even enough to yield a snowman.

Suffice it to say, I didn’t know much about snow when we were visiting my husband’s Aunt Sylvia outside of Bozeman, MT in the winter of 2006, so the whole experience was like Walt Disney World to a 5 year old. I was amazed and mesmerized by all things snow – snowmobiles, snowshoes, snowcoaches, adorable children being pulled in sleds by their parents. It was all adorable and so foreign to me.

While we were there, Aunt Sylvia encouraged us to head to Yellowstone during our stay – which involves traveling into the park via snowcoach and other insane planning because of the gigantic amount of snow they receive each year. It was literally the experience of a lifetime and I’d encourage anyone who has the opportunity to visit Yellowstone in the winter – GO!

On the way home from the park, she and her husband (Bill) took us cross country skiing in the backcountry. I’d had a few minutes to practice on my rented skis, but never in deep snow. We donned our skis and headed out on the trail. The fun began when the photographer in me thought “Self, wouldn’t it be AWESOME if we had a group photo of us all skiing out there together?”, so I set up my trusty tripod and prepared for a photo. Nevermind that the tripod feet sank about 3 feet  right into the snow.

The whole purpose of skis had yet to ring a bell in my silly little Cajun brain where snow was just for fun and building snowmen. I set up my camera and proceed to take off my skis….you know, so I can run and get in the photo after everyone is posed and in place for the picture. I’m sure you can tell where this is going…

Shortly after I un-clipped from my ski bindings, my husband figured out what I’d done and said “Oh shit – you TOOK OFF YOUR SKIS? What were you thinking? It’s going to take you forever to get those back on!” HA! I thought to myself. What the hell is he so upset about?

Shortly after, when I tried to put my skis back on, I learned a vital lesson of backcountry skiing – DON’T EVER TAKE OFF YOUR SKIS!  To those not in the know….the whole point of skis is to spread your weight so you don’t sink in the soft, powdery snow. Ohhhh, now I get it. HA! I never knew.

It took my husband, Uncle Bill and me almost 30 minutes to get those damn skis back on my feet, but we all had a good laugh in the end. We did manage to take a great group photo thanks to Uncle Bill and his mad ski stomping skills – thankfully he’s lived in Montana a long time and has had time to adapt to using skis…me, not so much.  Lucky for me, they were all good sports about the whole situation and we can still sit back and laugh today when we remember my still misunderstanding about skis. 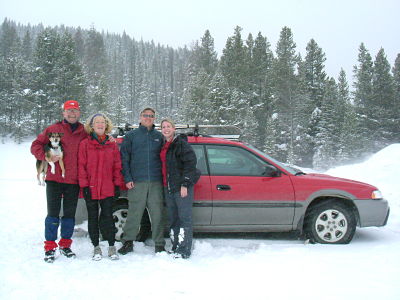 The 4 of us + Maggie (the pup) after our ski outing

There’s another comical ski story to tell as part of this trip, but I’ll have to save that for another blog post…stay tuned!

Perhaps to even the score, I should invite them to Louisiana and watch them try to figure out how to peel boiled crawfish. Fair trade, eh?