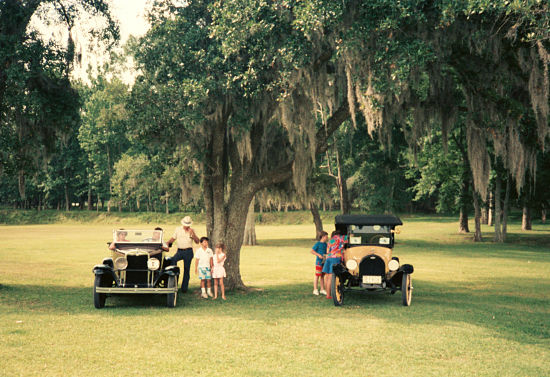 As mentioned in a previous post, my father bought and restored a 1922 Chevrolet that we nicknamed “Yellow Bird”. This car is like a family member to us – and some of our favorite memories as a family were when we’d participate in Antique Car rallies and caravans.

It’s likely a little known fact that there is an Antique Automobile Association with chapters all across the United States. The chapter our family belonged to would have rallies at least once a year and caravans/informal rides multiple times per year.

The informal rides were where we’d gather with a group of other antique car enthusiasts and caravan to a location. The caravan rides didn’t have rules like the rallies – they were more informal and more frequent. The caravans were fun, but the rallies were the main event.

An antique car club rally isn’t a race in the traditional sense. I’ve done my best to explain the rules and process below to give you an idea of what was in store for us as we cruised the backroads of Louisiana in an open air car, usually at the end of May – one of the hottest months of the year.

Stick with me folks as this can get complicated, but I’ve done my best to explain all the nuances and rules of a rally below:

Clear as mud? Right. Try explaining that to a kid – “No, we don’t want to speed. Even if we’re there first, it doesn’t mean we’ll win.” What the what?  What kind of race is this?

The funny part is that was a favorite family activity of ours. Throw in the temperament of old cars – their likelihood to break down and overheat and you have quite the adventure.

Do you have an unusual family activity or hobby that you’d like to share? Tell your story below…